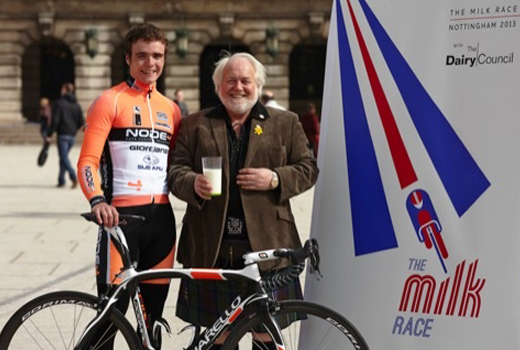 We’re proud to unveil the Swiss Modernist-inspired identity for The Milk Race, a cycle race popular in the 1980s, which has been revived by The Dairy Council and Milk Marketing Forum. The Milk Race, previously an elite men’s stage-based race, ran between 1958-1993, and is set to return as a road race in Nottingham for elite men and women, taking place in May.

Currently being used in launch material for the Race (as modelled opposite by Olympic gold medalist Steven Burke and Dairy Council Chairman Sandy Wilkie) we’re also working on branded winners’ jerseys and banners for the full length of the circuit. The work has been produced in conjunction with Kindred Agency who are developing online, social media and PR for the event.